Webster and the Horn Equation 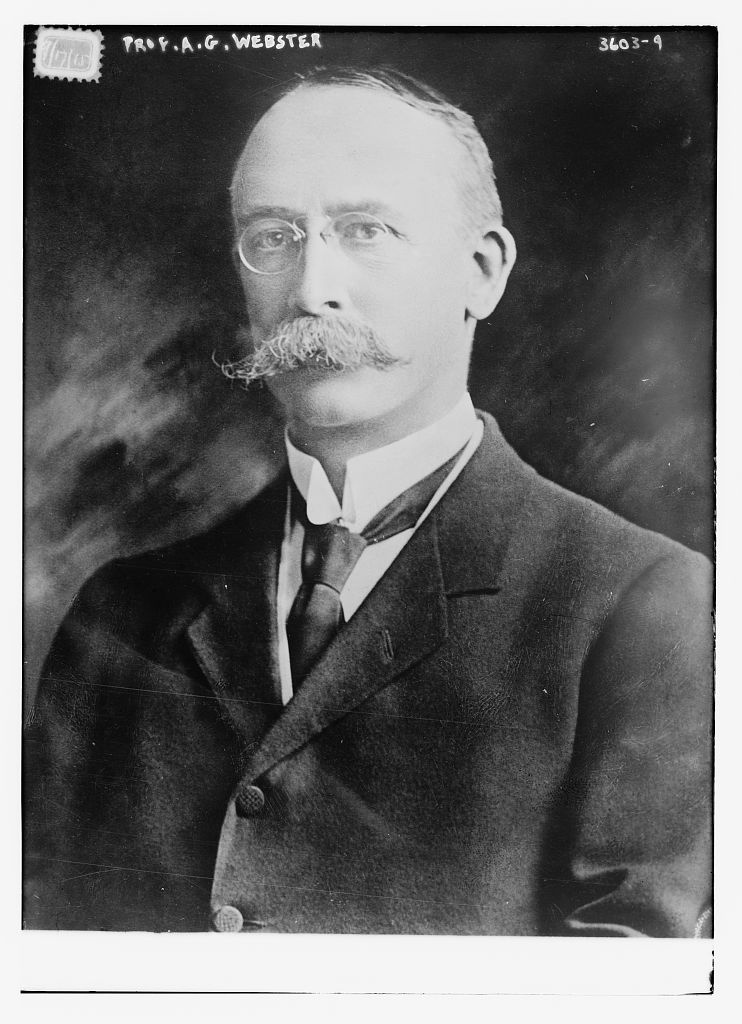 In July this year (2019), it is 100 years since Arthur Gordon Webster published his seminal paper "Acoustical Impedance and the Theory of Horns and of the Phonograph". Who was Webster, and what significance had his paper?

Arthur Gordon Webster was born in 1863. In 1885, he graduated from Harward College, and in the years from 1886 to 1890 he studied under Herman von Helmholtz for his Ph.D. From 1892 he was head of the Physical Laboratories at Clark University, and was appointed full professor in 1900. In 1899 he helped founding the Americal Physical Society, and became its president in 1903.

Webster was a proficient mathematician and a competent experimentalist, and spoke several languages fluently. His research was centred around acoustics and mechanics, and he invented the phonometer, an instrument to measure absolute sound intensity.

Webster committed suicide in 1923 following rumours that his physics department would be closed by the new president at Clark University.

His paper on horn theory was published in 1919, but it was actually originally read at a meeting of the American Physical Society at Philadelphia in December, 1914. It is not the first paper dealing with the horn equation, which was treated by Euler, Bernoulli and Lagrange in the 18th century, as described by Eisner (Edward Eisner, "Complete Solutions of the Webster Horn Equation", J. Acoust. Soc. Am. 41, 4 (2) (1966), pp. 1126–1146.). So why has Webster’s name been associated with it?

There are several reasons for this. First of all, it was a relatively accessible analysis of horns, presented at a time when it was needed. The old papers analysing sound in expanding tubes were not readily accessible, and Lord Rayleigh’s “Theory of Sound” was out of print. Second, Webster introduced the concept of acoustic impedance (although with a slightly different definition that what was later adopted), which tied in nicely with the impedance concept used by electrical engineers to analyse complex circuits. Thirdly, he showed how the equations for various types of finite horns could be developed, and in this way, the effect of the conditions at the mouth could be taken into account.

Why was it important? Up to this point, gramophone recording and reproduction had developed mainly through empirical methods, and radio broadcasting was in its infancy. With the vacuum tubes available at the time, output power was very low. To free the listener from using headphones an efficient loudspeaker (using a horn) was needed. The engineers needed a way to estimate and optimise the performance of the horn. As stated by professor V. Karapetoff in 1924, “This problem of horns is a 'house-on-fire' problem, in the sense that loud speakers are now being manufactured by the thousand, and while they are being manufactured and sold, we are trying to find out their fundamental theory.” Webster’s analysis made possible to find guidelines to use in the early stages of design, although the math was complex enough that for most cases rules of thumb based on equations that could be calculated by hand had to be employed.

The paper does not appear to have been widely recognized at first. The first citation seems to be one by Kennelly in 1923. But it was no doubt studied by engineers involved in loudspeaker design. And by the publication of the paper “The function and Design of Horns for Loud Speakers” by Hanna and Slepian in 1924, a much wider community was introduced to Webster and the horn equation. It is perhaps less widely known that at the same time, Paul B. Flanders and Donald A. Quarles at Western Electric Engineering Department, later Bell Labs, also studied horns and derived equations for predicting their performance. Even the performance of an entire system of driver, throat chamber and horn. But this work was only published in internal memos, and not publicly.

But the significance of Webster’s paper at the time was great. It was now possible to calculate the performance of horn loudspeakers, and one early user of this method (outside the Bell Labs) was Harry F. Olson of RCA, who published his findings in several papers. He and others studied the effects of horn flare, horn length and mouth size.

At this time, about 1925-1940, it appears to have been widely known that the equation was an approximation. As W. M. Hall puts it 1932, “The use of such approximate methods in the theory is justified only by the approximate nature of the results it is desired to obtain.” Experimenters often commented that the discrepancies between theory and experimental results were due to the approximate nature of the horn equation. This knowledge seems to have been more or less lost after the publication of Olson’s “Elements of acoustical engineering”, and Beranek’s “Acoustics”. Neither of these books mention the approximations in deriving the horn equation, and judging from published literature, it took several decades before it again became common knowledge among audio engineers.

Today, the main function of horns in pro audio is to provide directivity control. Compression drivers are crossed over at much higher frequencies than was common in the decades after Webster’s paper was published, and the higher power handling and cheap electrical power makes the acoustic load less important than it once was. And the only thing the horn equation really can do, is to predict the acoustic load, and the “transformer properties” of the horn. It is one-dimensional, and cannot predict directivity, which is a 3-dimensional quantity. For this we need more advanced methods, like FEM, BEM or MMM.

But for bass horns, it is still very useful. When the mouth is small enough to not have significant directivity, the predictions can be quite close to reality. The free software Hornresp has been successfully used by many to design low frequency horns. Since the throat impedance can be predicted with reasonably good accuracy, the power response of a speaker can be calculated. This applies to any frequency range.

The horn equation is also useful for instrument modelling, as the wave propagation in wind instruments is essentially one-dimensional, and the important property is the location of resonance frequencies.

In summary, Webster’s horn equation was a great help to the early electroacoustic engineers in the “roaring twenties”, when loudspeaker design progressed from a pure art to something that may be called science. But even today, it is not completely outdated. It still serves horn designers, and serves them well, if they ask the right questions. It cannot do everything, and it never claimed that either.

Does Webster deserve to have his name attached to it? I definitely think so. Webster was not the first to derive this equation, but he introduced it to the community of electrical engineers when it was needed, in a language they could understand. And to this day, nearly every paper dealing with the theory of horns, will cite his paper. It has become his equation.